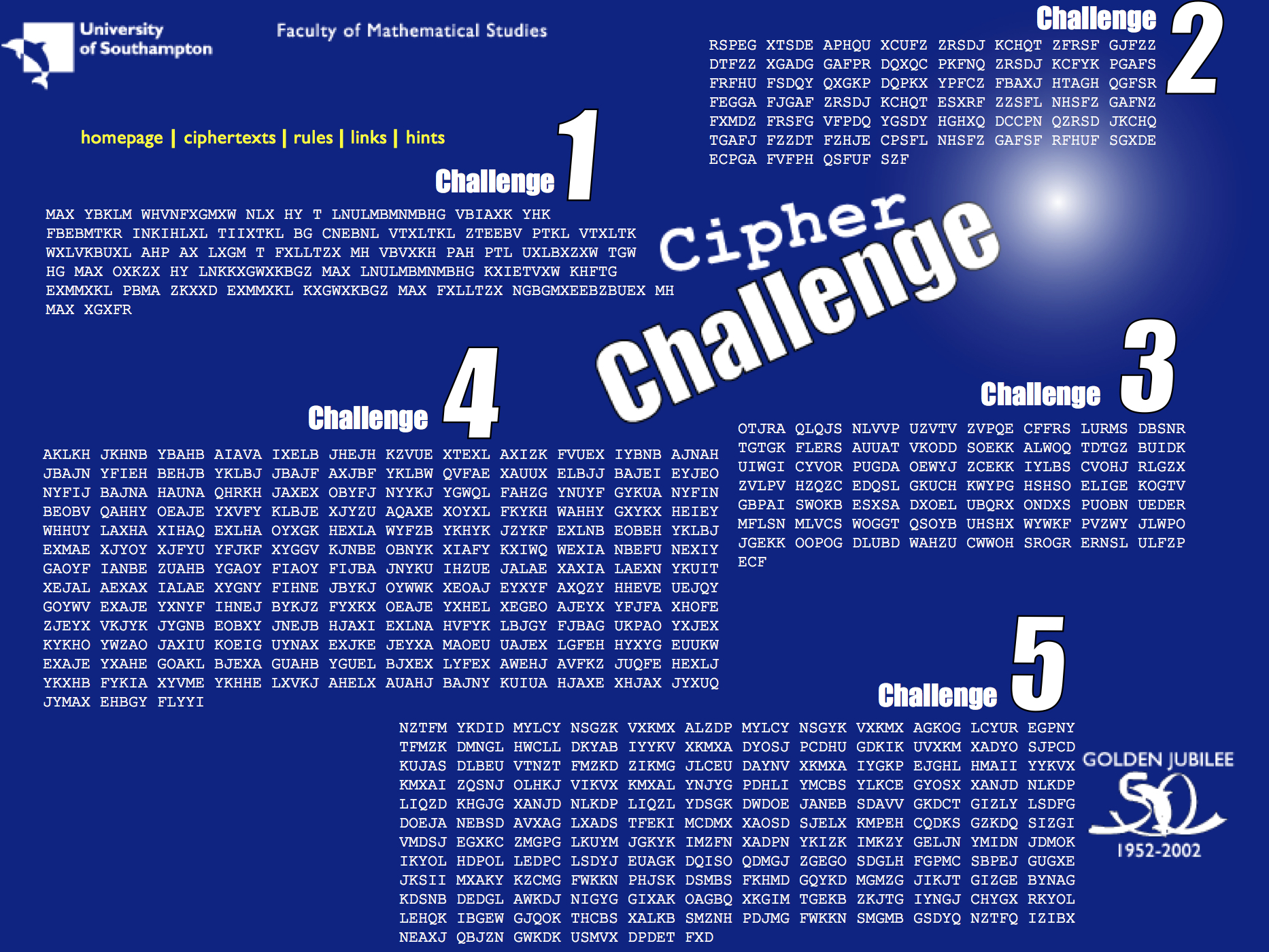 The Cipher Challenge has been running since 2001, starting with a local competition for Hampshire schools as part of the University of Southampton Silver jubilee celebrations. Designed and run by staff in the (then) Faculty of Mathematics) the competition had a simple website with five unrelated cipher texts to break, and prizes from the Faculty, IBM and Waterstones. Marking was a bit of a chore (we did it by hand back then) but the enthusiasm of the competitors was so infectious that we decided to roll it out nationally the following year. Harry had the idea of writing it as a story featuring Charles Babbage and Ada Lovelace, and hours of hand coding of a web site and trawling through history books to get the story right got us hooked and we never looked back. In 2002 we were kindly supported by a grant from the Engineering and Physical Sciences Research Council as part of their outreach activities, and we were able to get help in setting up the system that underpinned the Challenge for the next twelve years. At this point we were also joined by Bletchley Park, the London Mathematical Society, the Guardian Online and of course IBM who have been sponsors ever since, for which we will be eternally grateful.

In 2004 we were joined by Trinity College Cambridge, and GCHQ, and over the years we have received support and encouragement from  BCS, the chartered institute for computer IT, and Netcraft a cyber security company. Our most recent sponsor is our web development and hosting agency 10 Degrees, and we would like to express our gratitude to them all for making the competition possible.

The fifteen stories so far have ranged from a tale of fraud and misadventure in the battles with Napoleon, to the mysterious death of a world famous mathematician and the resulting adventures of his graduate student, Trinity. You can find a (very) brief synopsis of each of them below, and eventually we hope to bring those challenges back to life on this new site. In the meantime you might notice that some of the characters have returned for more than one story, and there is a tangled web of the connections between them. Harry himself often appears, and given the chronology that suggests that he might be some form of time traveller, but I just think he ages well.

If you have been with the Challenge for a while you will know that we make a lot of changes to the website last year plus d’information. We are grateful again to GCHQ, who sponsored the redesign and refactoring as part of our 15th anniversary celebrations. The new site provides a solid platform for the Challenge to grow over the next few years, and we hope that you will stay with us and encourage others to join the family that the National Cipher Challenge has become.